When your country’s website looks like a 1995 GeoCities homepage, you probably wouldn’t expect to find quality software developers. Thankfully, the developers at 4A Games didnt have anything to do with ukraine.org. Neither did Cryostasis developer Action Forms Limited, who also develops out of Kiev, Ukraine. Before I actually got to play Metro 2033, I had some expectations based on gameplay videos and screenshots. It bears more than a striking resemblance to Cryostasis, and I first thought it might have been from the same studio. Not quite, but close!

Metro 2033 is 4A Games debut release. After playing through the whole game, I found it more enjoyable than Action Forms Limited’s aforementioned debut title. They do share a lot in common: bleak settings, gritty textures, and strong foreign accents. I’ve come to expect it from foreign studios, but in the end that same post-apocalyptic feel makes this game similar to radiation- healthy only in small doses. It’s a nice place to vacation, but you wouldn’t want to live in there. However, I do hear they have a great public transportation system. *bad joke drum sound.* Through the course of the game, you will find yourself surrounded by beautiful, eerie graphics, rich, echoing sounds, and innovative gameplay.

There is a lot to like about the Metro (and it’s toxic surface of Moscow), so let’s get the bad out of the way first. This is certainly not a Modern Warfare shooter that you can jump in and out of for a quick play. The atmosphere fully immerses you and a sense of unease is always weighing you down. After all, you’re stuck underground in old, collapsing tunnel system while running around in the dark. The general sense of tension is what necessitates playing this game in small doses. This can be a good mood-setting device when the player is given a reprieve at various intervals. However, the complete linearity of the game made no allowance for it. At various points in your journey you will stop at different Metro stations. These settlements might make you think they are a place to unwind and do something new, but they are just quick pit stops to rearm or change guns. There are no interesting conversations to be had or side quests to embark upon. You just trade with the dealer and go to the next door.

Aside from the stressful pace, the plot itself is very confusing. It’s a good thing you don’t need to follow it to enjoy the game. Nuclear holocaust is something we all understand. Ragged survivors living underground and fighting mutant monsters- you had me at ‘nuclear.’ Beyond this simple concept, things just get weird. There are ghosts, weird energy wisps, mass-blackouts/hallucination, and… aliens? OK, they might not be aliens, but I could never figure out what they were (They always blur your vision in cinematics and mess with your mind). Don’t worry, it’s not a spoiler. You see these ‘Dark Ones’ near the beginning of the game. Even as the credits rolled, I wasnt quite sure what I had accomplished plot-wise.

They Mostly Come Out at Night…Mostly

The gameplay here is top-notch. It worked very well as an FPS, more on par with Stalker than Cryostasis. Assuming your rig is appropriately setup to handle your detail settings, you will find the controls responsive. That’s a blessing when you’re pitted against one of the game’s many monster swarming events. One of the most memorable is a rail car ride near the beginning, where charging mutants storm down the tunnel and assault you on all sides.

The graphics quality of this title is probably its strongest asset. Level design, animations, and innovative gameplay moments alike spare no expense in the details. Whether you are reloading a weapon, priming the charge on your head lamp, or checking the time, you are always given high quality eye candy. Note a couple of the detail shots below. 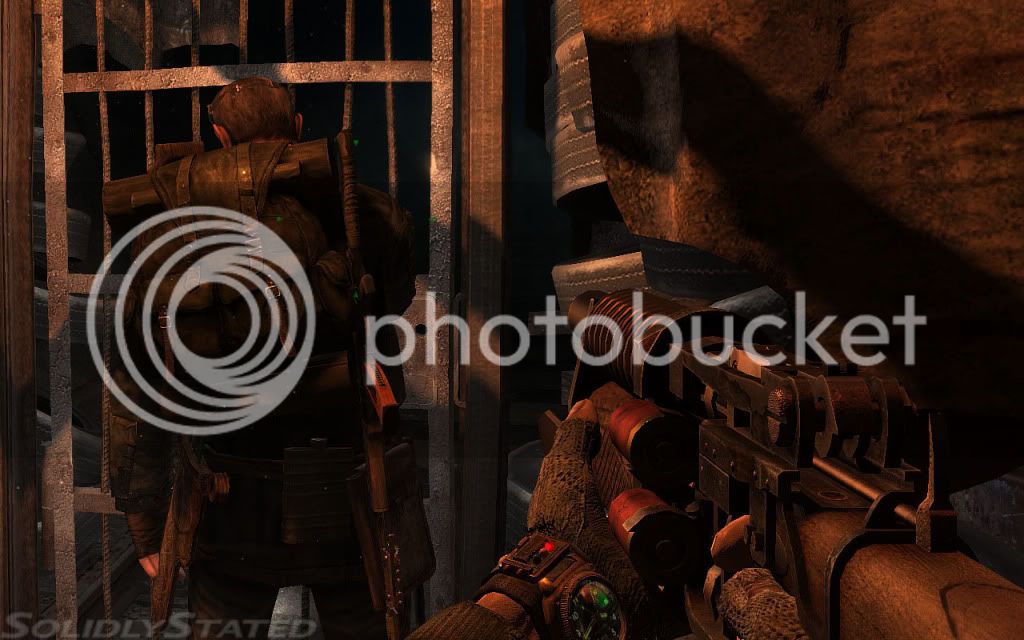 The lighting and shadow in this game is incredibly dynamic and you have the opportunity to toggle any light bulb or lamp on and off. In fact, I think the only reason this game has a scene with ‘ghosts’ is so it could show off some cool lighting techniques (you can only see shadows when your light is on). There are plenty of particle effects to show off volumetric lighting, and plenty of non-visual cues to help you manage your mission with an almost HUD-free screen. For instance, you will always know when its time to change the filter in that gas mask once your labored breathing becomes an asthmatic choking sound.

While you spend the majority of this adventure running through tunnels, the locales have a good variety. You get to trek occasionally on the surface, through decayed buildings, and even the library. While certainly linear, many one-off events keep rewarding you with entertainment. The ghost scene is just one of these. You’ll also experience an actual mutant stampede, detonate a bomb, and stare down ‘the Librarian,’ a territorial hulk that reminds me of a gorilla in its mannerisms. 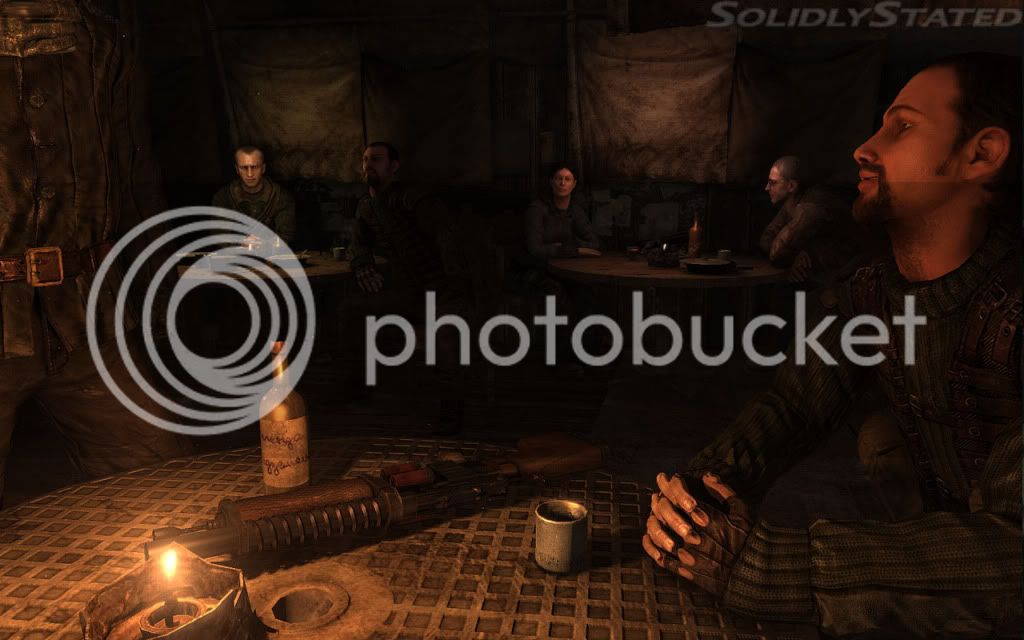 The bottom line question is, “should I buy this game?” It is certainly an entertaining, well made product that you will enjoy while it lasts. If that’s enough for you, this title will make a good addition to your library, so order Metro 2033 for PC or XBOX360 now

Otherwise, you will find about zero replay value here. There are no pickups or collectables. There is no weapon or armor upgrade system. There is no endgame reward. There are no sidequests. Once you beat it, you’ve seen all this title has to offer.